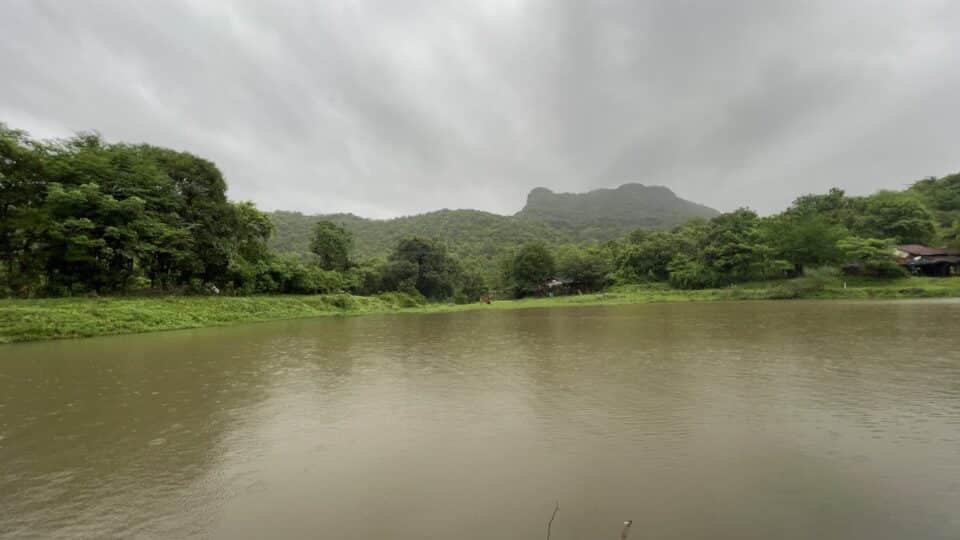 This trek to the tandulwadi fort was planned by Malad Cycling Club with a minimal fee of ONLY 100/- per person. Since this trek was planned after a long time and looking at the picture online, there were 90 participants.

Tandulwadi Fort is located near Saphale, 104 km north of Mumbai. Tandulwadi is not a fully built-up fort, but a series of structures spread over the top of the mountain. The fort dates back 800 years and was primarily used as a watch tower over the surrounding plains. At a height of 1524 feet, it has views of the surrounding towns of Saphale, the Zanzorli lake, and the confluence of the Surya and Vaitarna rivers. Source Wikipedia

Tandulwadi Fort trek is among very few spots that lie on the western line of Mumbai (the others being Takmak and Asheriga).

One can take a local or shuttle train to Saphale and take the local ST bus or any commute to Tandulwadi village.

We at MCC planned to go by car with members who were willing to take their car and accommodate other members. One of the organizers planned and created a list of people taking cars and allotted members in a specific car. There were about 17 cars that accommodated all members of the group.

We met at a planned meeting point i.e. Daishar Check Naka (DCN) at 6:00 am, we got snacks and extra food for each car.

We all left from the meeting point in 15 mins and headed towards Tandulwadi. We arrived at 7:40 am.

Start of Trek To Tandulwadi Fort

The climate was really good and it was drizzling as well. The task looked a little difficult looking at the huge mountain.

There was a short briefing about the trek and we started walking towards the summit to observe the awesome view from atop as we saw in online images. As the proverb goes

The journey of a thousand miles begins with one step.

The trail is not easy to navigate however you can find some white arrows on some rocks pointing you in the right direction. There are two to three routes to reach the top, and we chose the one organizers had planned. This involves about 40 to 60 mins of rock climbing for a moderate trekker, however, it took about 2 hours to reach the summit. The reason we took so much time was, that we were waiting for everyone to make sure all the 90 people reached the summit.

Tandulwadi Fort – What on the summit:

The most important thing to note is, that there’s nothing available on the top or on the route, not even water is available. So make sure to carry essential things you need and more importantly water.

At the top of the fort, you will observe the best of nature, the view, greenery, and trees and we also found cisterns, generally filled with water, but hardly any fortifications.

There can always be a rescue situation when trekking, and since we were in a huge group, we had one. Few members could not climb the trek and were stuck at the place where there was a huge rock which was difficult for many first-timers.

Some of the members from the group (so-called now a rescue team) went back from atop along with rope to get the members who could not make it on top. The rope was tied to a tree, the tree was off the trek path and I tied the rope using a knot that I learned in school scouts and guide sessions. I used the square knot along with the overhand knot. We got two people from our group and three who were trekking alone. One can see the sign of relief on the face of the rescuee.

We took many pictures and group pictures on the summit, and we also had snacks (we made sure no littering and carried garbage bags as well). We had planned to take a separate route to come back to the base which was supposed to be simpler but longer, however, the route was never-ending, the trek was not difficult but had big rocks and more of the journey was from a water stream.

I could hear the sound of relief when we reached the base. I changed and had a good time discussing the trek while having awesome tea along with snacks.

My View on Trek

Tandulwadi Fort Trek is one of the more recommended for moderate trekkers and for beginners or first time make sure you do it in a group as someplace you will definitely need help.

Some Do’s and Don’ts

A Ride on the Worli Sea Link, A Dream Come True

A Trip to Godâ€™s Own Country – Kerala

Very well written, you described almost everything we did on trekking… well done 👍

Exceptionally well written✌. I had the time of my life at the trek💜. Very well organized. Kuddos to the entire team👏.

Perfectly articulate trek which includes all required information to reach till top of mountain as well as things to carry along with the precaution.

Awesome narration of the event. Made me relive the moment of ecstasy. The most importantly the do’s and don’t wet not missed out. ❤️

As usual to the point and preciseness write-up, Ajay!