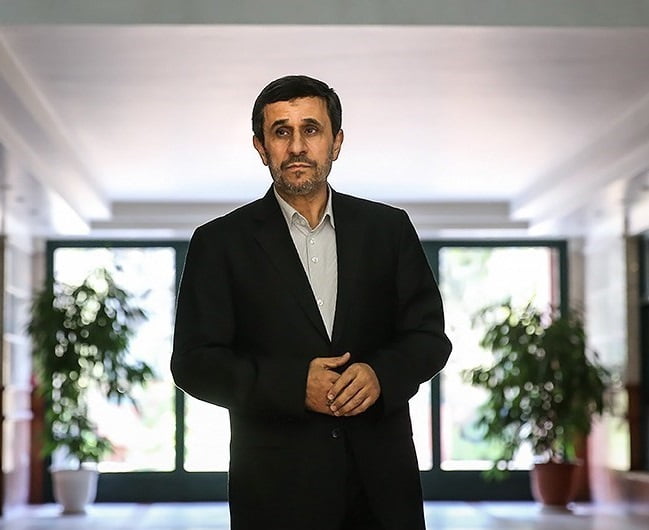 ‘When you look into the mirror in the morning what do you say to yourself’?

He answered: I see the person in the mirror and tell him ‘Remember’ you are no more than a small servant, ahead of you today is the heavy responsibility, and that is to serve the Iranian nation’.

Ahmedinejad, the Iranian President who astonished many when he first reached to the office of the Presidency by donating all the high valued Iranian carpets to one of the mosques in Tehran by replacing them with the low cost ordinary carpets. He observed that there was a huge extravagant lounge for receiving and welcoming the VIPs and he ordered it to be closed and asked the protocol office to arrange for an ordinary room only with wooden chairs.

On many instances he joins the cleaning staff of the municipality for cleaning the streets in the area where his home and the Presidency are located.

Under his authority whenever he appoints any minister to his post he gets a signed document from him with many points particularly highlighting that he shall remain poor and that his personal and his relatives accounts will be watched and the day he leaves the ministry shall be with dignity, and therefore it is not lawful for him or his relatives to take any advantage of his office. First of all he declared himself for all the ‘Big’ wealth and the property he owned was a Peugeot 504 car, model 1977, an old small house inherited from his father 40-years ago in one of the poorest zones in Tehran. His accounts with a zero balance and the only money comes in to his a/c was from his salary from the university as a lecturer with an amount of US$ 250 only.

For your information the President still lives in that same house. This is all what he owns; the president of one of the world’s important countries; strategically, economically, politically and with regard to its oil and defense. He even doesn’t take his personal salary with the argument that all the wealth belongs to the nation and he is the safeguard over it.
One of the things that impressed the staff at the presidency is the bag the President brings with him every day, which contains his breakfast; some sandwiches or bread with olive oil and cheese prepared by his wife and eats and enjoys it with all happiness.

One of the other things he changed was his personal carrier ‘the President’s Aircraft’ to a cargo aircraft in order to save the spending from the public treasury and he ordered that he will be flying with the ordinary airline in the economy class.. He organizes meetings every now and then with all the ministers to know their activities and efficiency and he closed down the office of the Manager of the president and any minister can enter to his office without any permission. He also stopped the welcome ceremonies like the red carpet, the photo session or any personal advertisement or respect of any kind while visiting any place in the country.

Whenever he has to stay in any of the hotels he asks them to make sure not to give him a room with any big bed because he doesn’t like to sleep on beds but rather likes to sleep on the floor on a simple mattress with a blanket.

Refer to some of the photographs which also confirm the above. The Iranian president is sleeping in the guest room of his house after getting away from his special guards who follow him wherever he goes and photo is taken by his small brother according to the Wifaq Newspaper which published this photo and the next day the photo was published in most of the world’s newspapers and magazines and particularly the Americans. During the prayer you can see that he is not sitting in the first row. And the final photo is of his dining room where the president is busy eating his simple meal.

Try comparing this with the emoluments and privileges our ministers get …. plus the amount they loot

Success Taught by my Room

Beej Mantra for Each Planet