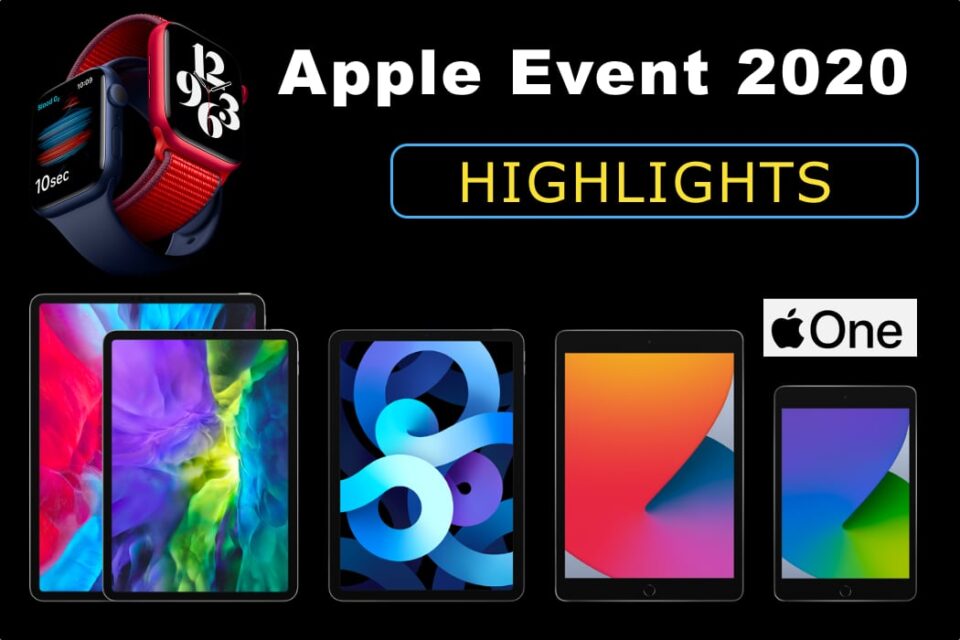 For nearly a decade now, every September people across the world look forward to Apple announcements regarding its Phones and Watches. While it’s usually held as a grand event to a packed audience, this year’s Apple Event held on September 15th was a virtual one. The Time Flies digital gathering saw a flurry of new products being unveiled including g new iPads, Watches, and some bundled services. Read on to know about all the new products and services.

The fourth generation in the Air series, iPad Air 2020, launched on Tuesday is an advanced version of the iPad Pro with a similar 10.9-inch Liquid Retina screen extending to the edges and additionally, full lamination, anti-reflective coat, and True Tone to enhance the visual experience. A newly launched A14 Bionic chip increases the power usage and performance of the iPad Air 2020. Other features include a 12MP camera for 4K videos, stereo sound in landscape views, USB ports for quicker data transfer, and Wi-Fi 6. Set to run on iPad 14, the iPad Air 2020 is being offered in 5 colour variants: space grey, silver, rose gold, sky blue, and green.

The 8th Gen iPad remains one of the most reasonably priced iPads with a starting price of USD 325. New features include a Retina display of 10.2 inches and a Touch ID on the home button. Powered by an A12 Bionic chip, the iPad is supposedly faster than some of the best Windows laptops, or Chromebooks. It’s equipped with a Neural Engine rendering it suitable for motion tracking & people occlusion in AR apps, as well as improved Siri performance and photo editing. Along with the iPad Air 2020, this iPad supports Magic Keyboard and the Apple Pencil.

The 6th in the Apple Watch Series might resemble the previous one in looks, but is quite different internally. Based on the A13 Bionic Chip, the new S6 Chip featured in the Watch Series 6 is optimized for 20% faster performance and a battery life of 18 hours. One of the best features of the new Watch is that it allows blood oxygen to be measured, so users can better analyse the status of their health and wellbeing. The Apple Watch 6 will be available in 2 different sizes – 44mm and 40mm. With 7 new watch faces, the Watch Series 6 also has new fitness features, sleep tracking, new workouts, and automatic detection of hand wash.

A relatively affordable option, Apple Watch SE rolls the best of its watches including the latest Watch Series 6 into one. With enviable features like Retina display, curved corners, S5 System, dual-core processor, and Fall Detection, Apple Watch SE is powered by the watchOS 7.

Apple One Launch in Apple Event 2020

A monthly subscription to all its services as a bundled package, Apple One includes Apple TV+, Apple Music, Apple Arcade along with 50GB iCloud Storage. As a family (up to 6), you can get all of this with additional storage. And a premier pack allows greater storage, Apple News+, and the latest Apple Fitness+. That last service gets you various kinds of new workouts weekly.

While there wasn’t any hint about the iPhone 12 at this event, it’s expected to be launched in the October event.

Save Energy & Money with Microsoft Hohm