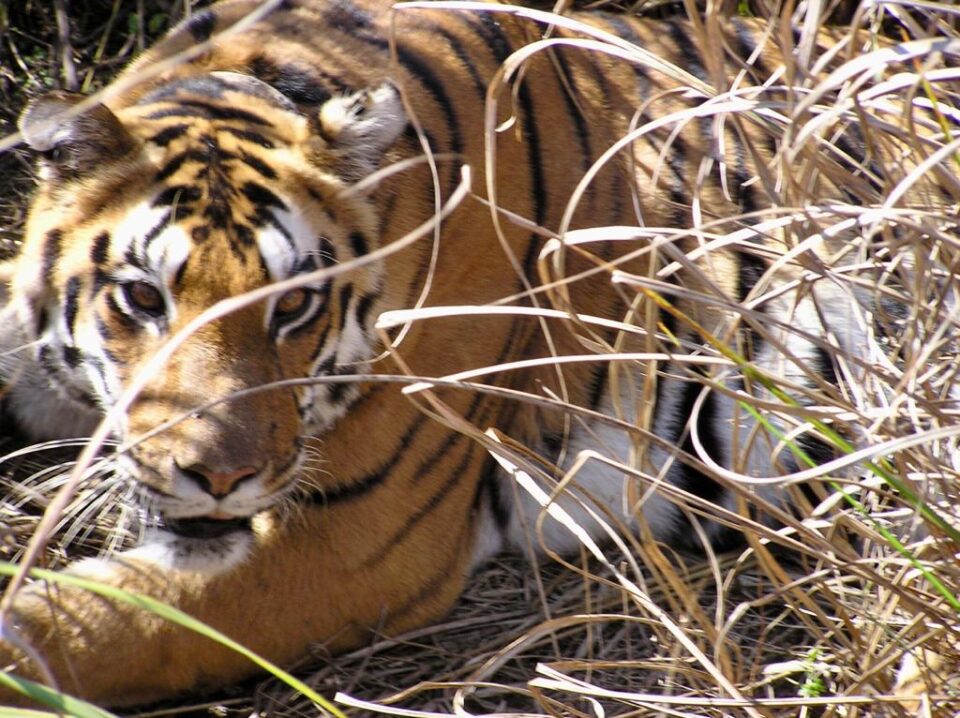 Tiger by the Trail – Driving along, suddenly we spot a fresh pugmark on the forest track. Some more lead away into a small meadow adjoining the thick Sal forest that lies beyond. We stop the Gypsy by the side and wait. It is 4:30 on a winter evening and light is already beginning to fade. We are on unfamiliar terrain, in the middle of jungles that stretch for miles in every direction. The silence is so thick it completely envelops us. You could hear a pin drop. We strain our ears for animal sounds that would provide the next clue.

We are not disappointed – a distant alarm call of a frightened Chital (Spotted deer) somewhere in the heart of the forest breaks the eerie silence and provides us with information for the next move.

Gunning the engine, we head in the general direction of the call. We are in Tiger country and on the trail of a large male of the species, deep inside its territory. Many alarm calls, a few intimidating roars, and some more stops & starts later we encounter the big cat as dusk settles. In the jungle twilight, we look into the fiery eyes of the animal standing less than 10 feet away, even as our hairs stand on end. The big cat is almost as ‘long’ as our Gypsy, and there is not much that separates us from him.

Very few adventures can provide the same adrenaline kick as the thrill of being face-to-face with a Royal Bengal Tiger in the wild. A few fortuitous sightings aside, the sheer enjoyment of tracking the tiger in its original habitat provides satisfaction like no other nature adventure.

A week at Kanha Wildlife Sanctuary, one of the “Project Tiger” locations, makes for an unforgettable experience in the wild. Located in the central Indian state of Madhya Pradesh (M.P.), it can be accessed from Jabalpur (M.P.), Nagpur (Maharashtra), or Raipur (Chattisgarh), by road. There are three entry gates to the park; depending on which direction you are traveling from, you will have Mukki, Kanha, or Kisli gates as the closest entry point. There is ample lodge accommodation around the main entry gates, but one is advised to reserve a room well in advance to avoid disappointment.

Kanha is roughly 1000 Sq. Kms. of pristine forests largely made up of Sal, Bamboo, and Mahua trees that form the buffer zone around the 950 or so Sq. Kms. of dense jungles and lush grasslands of the National Park (the core zone). The 1950 Sq. Kms of National Park comprising the Mandla and Balaghat districts of M.P. is located in the Maikal Hills of the Satpura range of mountains. We traveled to Kanha by road via Nagpur, which lies 290 Kms to its South-West and is well connected by air to major cities in India. It is a good 6 hr drive from Nagpur to Kanha and an exhilarating one too.

As you drive up from Nagpur into M.P. and further through the buffer zone around the National Park, you see the steady encroachment of cities, towns, and villages into what used to be forest lands…. thanks to the unflinching march of civilization. It makes one wonder what life would have been like, for man and beast, a few hundred years ago, when the forests were intact, and nature was more in balance. Finally, and thankfully, you leave human habitation behind as you head deeper and deeper into the forest.

Unlike in an African Safari where wild animals are virtually on parade and in large numbers too, Kanha offers the challenge of following the movement of a big cat in dense jungles, through a combination of visual and audio clues in the environment, and extensive knowledge of the terrain. The reward – your own “personal tiger” you took the trouble of seeking out! Knowledgeable naturalists and cooperative forest officials can make the game drives intellectually stimulating and the tracking experience worthwhile. This is the land, and these are the jungles, that inspired Rudyard Kipling to write “Jungle Book”, or so the folklore goes.

If you are unlucky to not have the experience of a tiger crossing the road in front of you when you least expected it, or otherwise unwilling to take the trouble of seeking out a “personal tiger”, then there is always the very dependable “Tiger Show” that happens in one or other part of the jungle every day. Visitors can get to view the tiger on the elephant’s back that expert trackers have taken the trouble of locating. Although not as exciting, the “tiger show” ensures that even the least adventurous do not go back without seeing one.

A mere 100 yrs back there were 100,000 tigers in the wild around the world. Today there are only 5000 or so. The good news: roughly half that number is in India – we are indeed privileged to have this majestic cat roam our forests!

Now for the bad news: tigers are seriously headed toward extinction. A combination of factors is working against this animal’s survival for a long – loss of deforestation, mention trafficking in animal parts, which has already pushed the animal to the brink. At this rate, by 2020, there will be no more tigers left in the wild, and our habitat / not-to-organized grandchildren may not get to see one except in a zoo perhaps; the rest will have to be content watching documentaries on television. However, with the conservation efforts that are happening under the “Project Tiger” initiative, one hopes the above prognostication will not come to pass.

Besides tigers, there is a lot to see and do in Kanha. For visitors interested in wildlife, there is a variety of deer – Chital, Sambar, the hard-ground Barasingha, the Barking Deer, etc., and other animals like Wild Dogs, Jackal, the Gaur (Indian Bison), Sloth Bear, and the extremely shy, Leopard. In addition, there are over 300 species of birds for those interested in bird watching. Others that simply want to experience nature, can take off on long nature treks – for the sheer pleasure of being in the lap of nature with sights and sounds unparalleled anywhere in the wild.

A Basic Guide to Camping