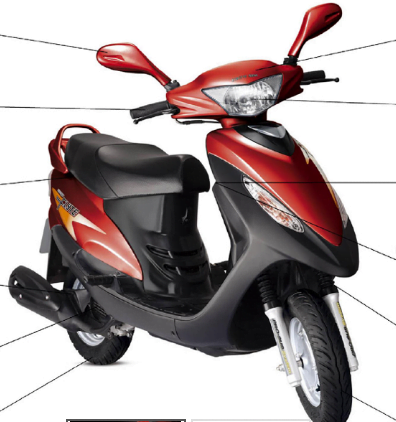 India is the second leading manufacturer of two-wheelers across the world. The growth of two-wheelers in India is tremendous in the recent few years. The two-wheeler industry has grown from 3 million in1998 to 8 million in 2008. Mahindra is one of the India’s leading automotive companies. Mahindra two wheelers are an added sensitive point for customers to interrelate with various Mahindra products and services. After the success in tractor selling sector, Mahindra entered to concrete their position in two-wheeler market. Mahindra 2 Wheelers manufactures and sells a complete range of two wheelers from scooters to motorcycles.

Comet: Comet 250 can be considered as one of the real sports bike in India within an affordable price of Rs. 1.67 lacs. The features of this bike are as follows:

Stryker:In comparison to other bikes, the presence of oil filter in Stryker increases the life of its engine and the gas filled rear shock absorbers provide a downy ride on patchy roads. Stryker is specially made for Indian roads at a standard price of Rs. 34,999. Stryker offers a host of features:

Kinetic Blaze: Blaze is made of sensational Italian design. The features of Blaze are:

Kinetic SYM Flyte: It consists of air cooled engine. The features of Flyte are:

Kinetic Nova 135: Nova 135 can easily switch turns and spiky curves. The features of Nova 135 are:

Kinetic 4s: The features of 4s are:

Knock out at 15! Your Vehicle May Soon Be Scrapped