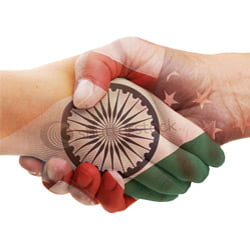 America and India are now improving the relationships between them. The five days visit of US secretary of states Hilary Clinton’s is a clear indication of the above point. The relationship between two nations always increases by the visit of one nation’s representative to the other. This visit is no exception, the two nations, America and India raised their hand towards each other for their own benefits and for some noble causes as well.

Hilary Clinton’s visit to India started by staying at the Taj Palace & Towers, the symbol of 26/11/2008. She invited India’s Prime Minister Mr. Manmohan Singh as the first state guest on Washington where Mr. Barack Obama would like to have a word with him.

Hilary Clinton’s meeting with UPA chairperson, Mrs. Sonia Gandhi was one of the big event of her tour to India. It was conducted on 20th July, 2009 and was scheduled for one hour. The meeting went by very smoothly without the help of any aids and without any intervention of a tea or coffee break. The importance and seriousness of the meeting could be understood by this point. Also, no US officials or diplomats were present during the meeting. Only Mr. Karan Singh, the head of UPA’s external affairs was present. When the meeting ended, one and a half hour had passed by, extra half an hour being increased during the meeting instantly. The closeness between the two diplomacies can be easily measured by the nature of the meeting. Hilary Clinton’s visit to India came to an end on 21st July 2009, but the impact it would have on the relationships between the two nations would definitely last for a long time.

Several agreements were signed between the two countries which would be very helpful to both of them. By the End-user verification agreement India would now be able to trade with America for war equipments or military resources. Earlier, India had to rely on Russia, Israel and France for these resources. Some people naturally allege that India had surrendered its sovereignty to America, but this is not true as America would not be able to conduct any type of inspections anytime or anywhere. The terms had been properly set up by India denying such operations.

How to choose the right fragrance