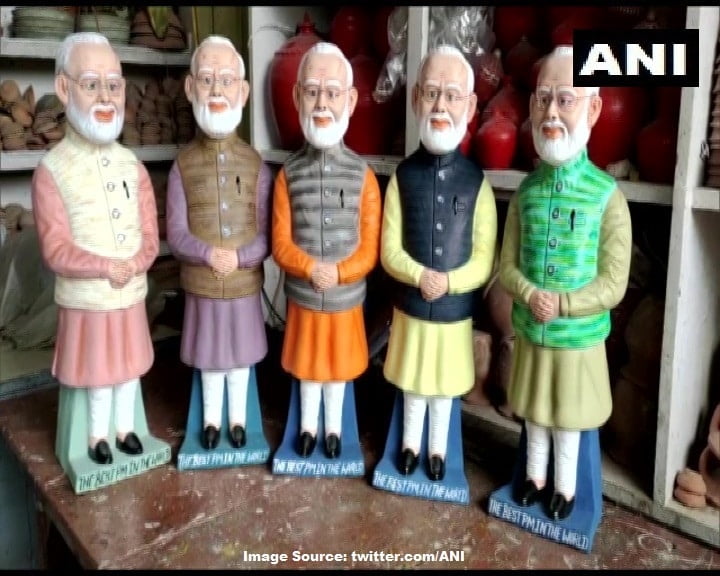 A sculpture from Bihar is gaining immense popularity for his creativity. He sculpted miniature statues of PM Narendra Modi that serve as piggy banks.

The sculptor, Jai Prakash is from Bihar’s Muzaffarnagar and has been making these piggy banks. The piggy banks are the exact replica of PM Modi and each can store up to 1 lakh rupees in coins and currency notes.

The piggy bank serves a dual purpose, one, it inculcates savings habits in the kids, and secondly, teaches children about our country’s prime minister.

According to the sculptor, Jai Prakash, Prime Minister Modi started Janta Curfew during the Covid-19 surge in 2020. The PM worked hard to keep people within their homes and reduce unnecessary gatherings to prevent the surge.

Interestingly, he has made these piggy banks in various replicas. Thus, buyers can get more than one pose of the Prime Minister as a piggy bank. The finesse of his work is indeed commendable.

In a few of the piggy banks, he has also written: “The best PM in the world” which shows his faith in the great work of the Indian Prime Minister.

ANI spotted the talent of sculptor Jai Prakash and appreciated it by posting a tweet on its official Twitter handle:

It is also not the first time that a replica of PM Modi has been made into an everyday thing. Previously, Modi firecrackers, water guns, etc. have been made and were quite popular.

Whether the piggy bank will find many buyers is yet to be seen, but for now, this shows the faith and trust people have in our current prime minister.

Mumbai Dabbawalas Struggle for a Living Amid Covid-19 Pandemic, Lockdown

What a creative idea to sell the product. Kudos to the creator.