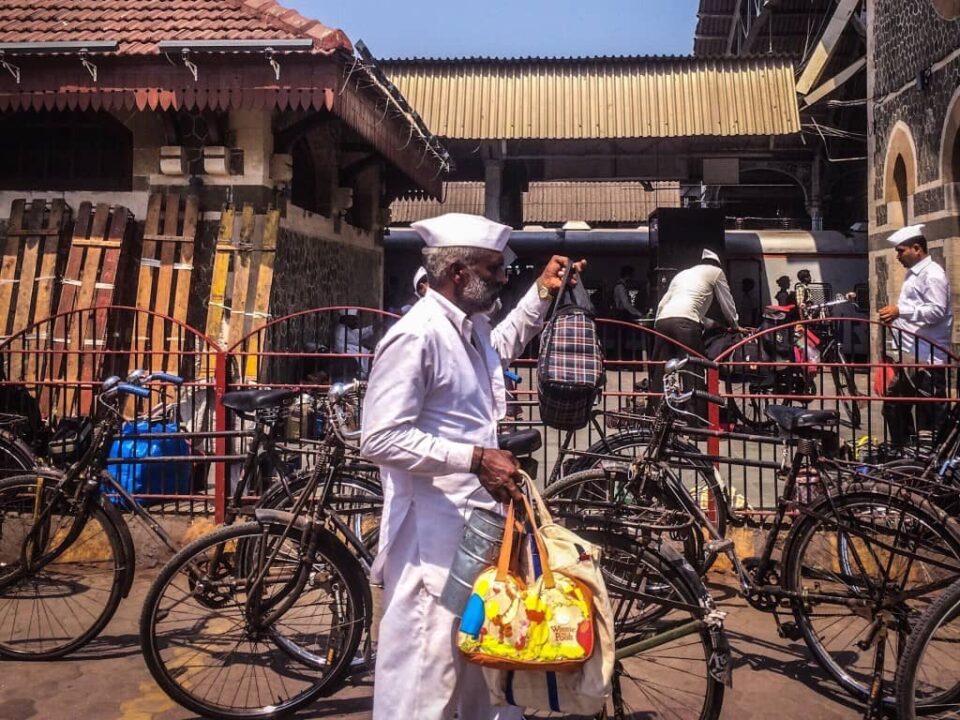 Mumbai dabbawalas are a name to reckon with. A strong force of 5000 men has been serving Mumbai’s workforce for over 125 years by ferrying their lunches. But as irony would have it, today, the pandemic and the ensuing lockdown in Mumbai have brutally bruised this community.

With the ongoing restrictions and no deliveries, these dabbawalas are seeing their savings dwindling. Come rain or scorching heat, the dabbawalas have proved to be an epitome of punctuality and hard work, serving more than 2 lakh tiffins daily.

The dabbawalas work under a branch system, where each of them caters to a specific railway station. They would collect the tiffins from their earmarked area to be taken to their destination in big corporate buildings. The first lockdown lasted from the last week of March 2020 to Oct 2020.

While each catered to 25 tiffin deliveries a day, today they are down to 4 to 5 deliveries a day, clearly hitting their livelihood. Most dabbawalas say that their earnings have dwindled from Rs.20000 monthly to just about Rs.5000 a month. Today, the strong team of 5000 dabbawalas crumpled to only 100!

Transportation the Biggest Woe for Dabbawalas

Even though Mumbai has partly opened up under the Mission Begin Again and private offices allowing 10% attendance in person, the situation remains dire for the dabbawalas. The local trains were shut during the first wave and again in the second wave. The work-from-home culture directly impacted the food deliveries and thereby the earnings of these dabbawalas.

Again, the restricted entry to local trains further aggravated the problems of the dabbawalas, making it impossible for them to serve whatever little remained of their business. Even when the local trains opened up, the QR-code system was in place for several months. Unfortunately, very few of the dabbawalas had access to a smartphone.

Dabbawalas rely heavily on bicycles to ferry tiffins from homes to respective railway stations and further on to the offices. With deliveries paused, many of them have not used cycles for a long time. Their bicycles have rusted and they do not have enough for repairs. This is going to be a serious issue for them in the coming months.

With the COVID situation on temporary retreat but danger still lurking, the dabbawalas are facing a dilemma whether they will be allowed entry inside the offices or not, being an “outsider”.

Although people have been assured that orders will be placed as soon as the offices open again, but looks like a distant dream at least as of now, with the reports of new variants and mutations of the virus, and the expected deadly 3rd wave of the pandemic. Many of them have moved to nearby villages but are willing to be in the city as soon as the service starts.

Feeding Their Families Has Become a Central Worry

Most of the dabbawalas are on the hunt for new jobs that can feed them and their family during the pandemic of COVID-19. They are distraught worrying about what the future holds for them

Cyclone Nisarg Added Salt to the Wounds of Dabbawalas

Many of them who come from the regions of western Maharashtra, retreated to their respective villages, just before another crushing wave of the cyclone Nisarg hit the city and surrounding regions. It damaged their houses and the crops in their fields. Many of these Mumbai dabbawalas are now living without proper electricity or connectivity.

Finally Some Relief! NGOs Step in to Help Mumbai’s Dabbawalas

However, they got some relief from Mumbai Dabbawala Association financially during the first lockdown. A sum of Rs. 1500 was deposited in the accounts of the association members. Also, NGOs like Smita Thakrey’s Mukti Foundation and a few others have been offering financial help and food supplies, along with the State Government initiatives.

Local people of the city also started crowdfunding campaigns to ensure their survival providing them with rations, masks, sanitizers, and other equipment for safety.

The Grandeur Before Covid19 Pandemic

The industry and the business of Mumbai dabbawalas had been the subject of many studies in India and especially abroad. The Harvard School of Business even graded the system with a ‘Six Sigma’ which highlights the fact that this person has less than 3.4 mistakes in a series of almost ten lakh deliveries.

The system has even taught efficiency lessons to commercial giants like FedEx, Amazon, and the great businessman from Britain, Sir Richard Branson. The Mumbai dabbawalas were wowed by Prince Charles in the year 2003 and two of them received an invitation to the royal wedding of Prince Charles with Camilla Parker-Bowles.

Dabbawalas Seek Help from the Government

Battered, bruised, and out of jobs, dabbawalas are looking for government help to bring them out of the aftermath of the cyclone. Then restore them with the strength to counter the ongoing pandemic, of which the third wave is already predicted.

Without Government initiatives, we may lose the old dabbawala system that delivers thousands of home-cooked meals daily.

Going Abroad? Here’s How to Link Your Passport Details with Covid-19 Vaccination Certificate

They were once the lifeline for office goers at one time. And there was research paper published on their travel management at Oxford University.. feeling so bad on their status. I have read somewhere they have now started kitchen service and deliver tiffins directly cooked by them.

Thanks for your comment, everyone learnt their own ways to work in this pandemic.